Twice during 1994 the violet burning entered the studio to record two different sets of demo EPs. Originally released on cassettes and sold only at the now historic violets shows at the now defunct clubs, The Coconut Teaser and The Electric Ballroom in Southern California

These would be the recordings that led to the Self Titled album released in 1996.These are also the controversial recordings born out of the devastation surrounding the violet burning during 1990-93 which saw love lost, cult-like church/record label behavior, and the deaths of a few of the band's closest friends and collaborators.

Some of these versions have been previously made available on violet underground volume 4.This is the first time these recordings have been made available together completely uncensored in their original order. Yes, we feel that it's been long enough to let Fever out for those of you who want the original explicitly passionate version. Parental Advisory Explicit Lyrics

You Wouldn't Understand Anyways originally had two choices of artwork on the cassettes. Both of those choices will be available for your iTunes or MP3 player.

You Wouldn't Understand Anyways- recorded in Denver, CO. the band remains grateful to our friends in Colorado who helped support us then, and continue their support today.

Lillian Gish - recorded in Huntington Beach, CA by our longtime friend and mentor, Gene Eugene who we lost a few years later.

Listen to The Vault Releases here

If you have never heard of Poor Old Lu, they formed in Seattle and were active the at the same time as the likes of Pearl Jam, Nirvana, and Sunny Day Real Estate.  They released 3 LPs from 1993-1996, broke up for awhile, reformed in 2002 for another LP, and then have been on indefinite hiatus.

As of a couple of hours ago, you can "purchase" a new single from Poor Old Lu along with a new shirt. This is the first new song the band has released in a decade. I can't really explain how exciting this is for me. Unlike most (?) bands, Poor Old Lu has only recorded with the four original members, and this song is no different- Scott Hunter (vocals), Aaron Sprinkle (guitar), Nick Barber (bass), and Jesse Sprinkle (drums). 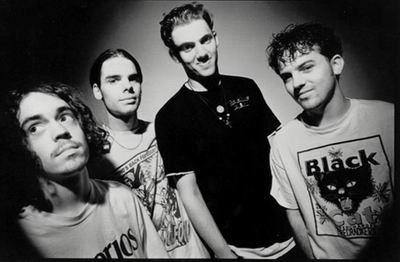 Little Rock's Bear Colony just released their new full-length Soft Eyes via Esperanza Plantation. The album is the band's first collection of new material in five years since their breakthrough debut We Came Here to Die. This release finds the band moving forward with more polished song construction and lusher soundscapes. Much of the inspiration for this record came from founder and vocalist Vincent Griffin's mother's struggle and subsequent death from terminal lung cancer this past September. The release is dedicated to her memory.

One of the several standout tracks that has been on repeat is the dense, electronic "Flask Retort." The video depicts a day in the life a gent with some pretty colorful effects showing through. The clip was directed by the previously mentioned Vincent Griffin and Jared Hankins. Here's the first single off the new album.

As you may know, we released a new song and video last week for the song "The Drug That You Can Never Take." It is from the forthcoming album 'SP3', the third installment in the 'Spirituals' series which began quite a while ago. Please enjoy and share responsibly.

The Spirituals were always intended to be a trilogy of records. They were also intended to be entirely covers of other songs. The first two records are, being comprised of old Spirituals and a couple of favorites from unexpected Hymnists. However, when we started into the third round (finally, after quite the delay...), and looked at the songs we had originally chosen to do, we determined that they weren't quite as interesting or impactful as the previous ones were. And so the questionably brave notion of composing our own was born.

A year and a half later (and then some), we are now ready to begin rolling them out. Most of the time was spent on the lyrics, which was immensely more difficult than we had imagined going in. Hours of writing words, only to come up with a usable line or two. There is a distinct thematic concept and structure to the album, which helped frame each song, and enabled us to shoot for something, but trying to say the things we wanted to say in a singable way proved challenging. Which is why the album will become accompanied by both the lyrics and supplemental writings, as well as a video for each song.

You will be able to purchase it at cushkuxh.org or Northern Records

Formed in 1996, The Lassie Foundation released their first EP, California. California defined the group's sound, a mix of the smooth 60s and early 70s West Coast pop music and the sonic power of British shoegaze music. They are easily one of the best bands to hit the scene in the last 20 years or so. It's a shame that they have such a small devoted following. They should be well known through out the world.

They Sang As They Slew

Song of the Week

Ghost Of The Russian Empire-